We had sunshine today for the first time in a week or so and I found myself out in the garden. I've been contemplating setting up a permanent raised bed for a couple of weeks to replace the styrofoam boxes.

The bed position I decided on is actually opposite to where the boxes had been - last week I was idly staring out at the yard visualising how it would look, and suddenly realised that where they were didn't get the morning sun. In fact after a couple of days of tracking the sun, I realised it was only getting about 3-4 hours of afternoon sun. On the opposite side of the courtyard it gets at least 6 hours sun, possibly more if I trim the grevilleas a bit - why did I not realise that before??!

So while Billy was playing in his cubby, I decided to just bring the bricks down from up near the fence - just to start. I found some cool interlocking cement blocks that we'd inherited from a friend when he dismantled his cement BBQ, and figured they'd be ideal.

Several wheelbarrow loads later, I put the blocks in place - too easy! 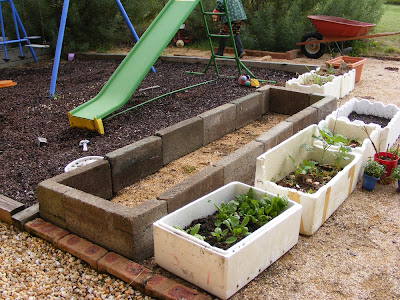 Meanwhile Billy decided he wanted a herb garden, and was adamant where he wanted to put it and how he wanted it to look, so I fetched the bricks for him and let him go. We spotted a couple of little brown spotted frogs hiding amongst the bricks - not sure what they were, but they were cute! 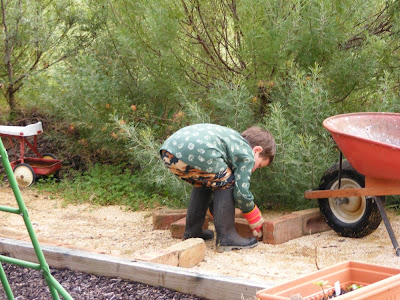 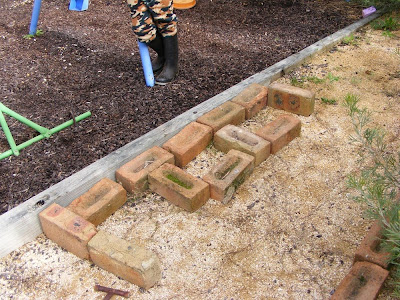 After lunch it was still nice & sunny, so we finished the gardens off. I filled my garden with a bale of mulch hay, a bag of (local) horse poo, and a box of worm castings (and some worms - I'm sure they'll be happy in their new home!) I threw a handful of old seeds in and will plant some seedlings in a couple of weeks. 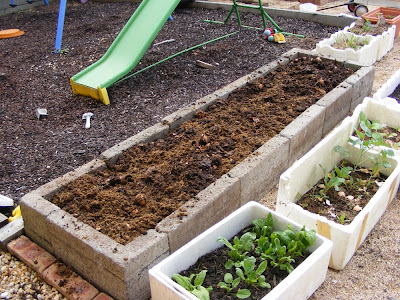 I tipped some soil into Billy's garden, he spread it out, planted some herb seeds and sang to them :) I'm not sure how well it will grow since it's not in the greatest position, but he had fun. 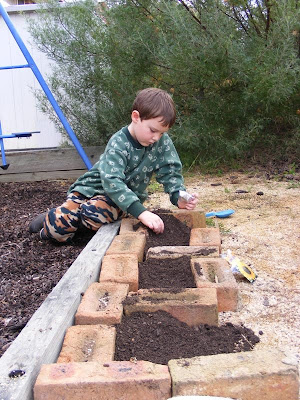 My muscles are slightly weary, but it's the weariness of a job well done!
Posted by Kez at 7:18 pm

Satisfaction of a job well done and time with our children...perfect!

Hope your garden grows well, and Billy's! It's great that he is interested and keen. :)