How did that happen?! - it's been a week since my last post!

I had a quite busy week last week with work matters - trying to juggle lots of projects again - and also with general family activities. We seemed to be out most days which I find stressful.

So, what did we do? On Tuesday I had a meeting with a client in Newcastle for a new project (Billy is quite good, he takes along activity books and things and keeps himself amused in a corner of the room while I'm meeting. I always explain to the client up front and no one has had an issue - they all think he's adorable lol).

We had time to kill between my meeting and his drama class, so we spent a wonderful hour or so at the beach - the weather was lovely & sunny, with just a hint of a cool breeze. We made sandcastles, Billy played along the edge of the water, we 'met' some Indian tourists walking along the beach (Billy got his photo taken with them for some reason!), chatted to a guy who was using his metal detector along the beach, watched the lifeguards on their jetskis, and waited for the tide to wash the sandcastle away. It was a very pleasant way to spend time! (Photos taken on my phone so not the greatest quality!) 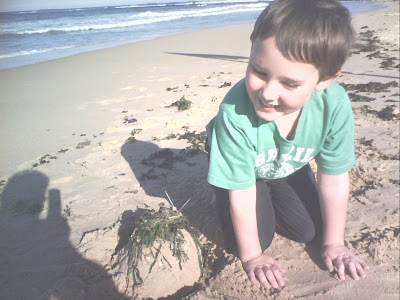 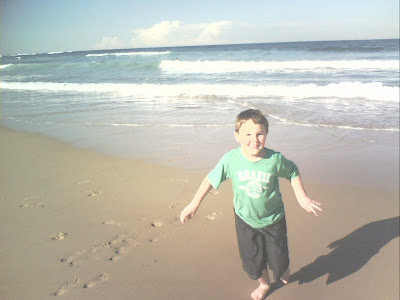 Wednesday morning I spent some time in the garden - I pulled some carpet off the back garden where I was using it to kill weeds, and covered it with manure & mulch. Scared myself silly when I uncovered a blue-tongue lizard!!! I also spent some time weeding part of the back path - we have a huge problem with a plant I call 'sticky beak' - they are everywhere, and stick to your clothes, hair, skin :( They're also called cobbler's pegs, farmer's friend or pitchforks.

Thursday we had swimming, and then spent the day with my family for my niece's 11th b'day.

Friday morning was spent trying to tidy the house and then in the afternoon we met up with friends for a chat & play.

We went away for the weekend down to Sydney. Saturday we went to the Australian Museum to see their dinosaur exhibit. 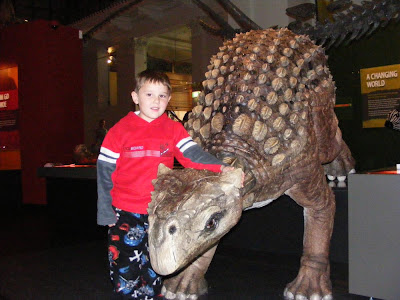 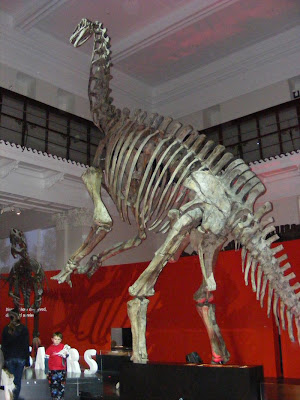 It was pretty cool - I was a bit disappointed that a lot of the skeletons seemed to be casts rather than real, but it was still cool. We spent some time going through the rest of the museum too - since we were there and had paid a small fortune to get in! Someone was getting quite tired and bored by then though...

Sunday Pete & Billy had a "boy's day" and went to the Swans AFL game together, while I stayed in the hotel room, had a nap, and read some books. Bliss!!!!

Yesterday we came home, unpacked, did the washing etc etc. I'm a day behind now so no Menu Plan Monday, and straight into another busy week.
Posted by Kez at 8:33 am