I just found this old post still in my drafts for some reason... 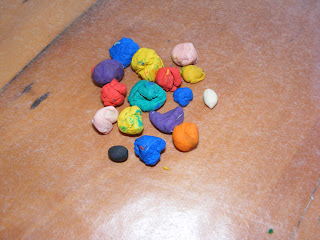 Placing them on a piece of waxed paper, and then covering them with another piece, we then used a great deal of pressure of them to simulate the earth's pressure. (ie we put a book down, stood on it and jumped up and down!) 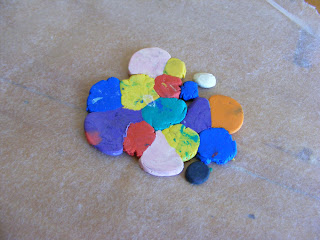 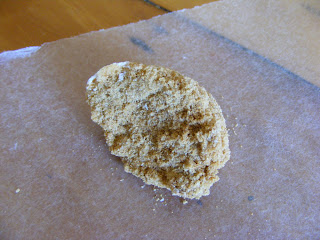 Email ThisBlogThis!Share to TwitterShare to FacebookShare to Pinterest
Labels: Homeschooling, Science and Technology

She showed the kids a CD of Aboriginal Art firstly, to get them inspired.  Then they moved to the tables and drew their own designs on paper.

Once they were satisfied with their designs, they traced or redrew them onto a foam block - like a piece of thin styrofoam.  Using pointy instruments, they had to make sure the grooves were deep enough so they wouldn't get inked. 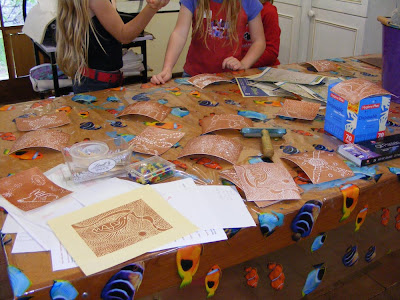 They inked up their plates and then used Bernie's printing press to make copies of them.  They all looked fantastic, but some of the kid's work just blew me away, like these ones: 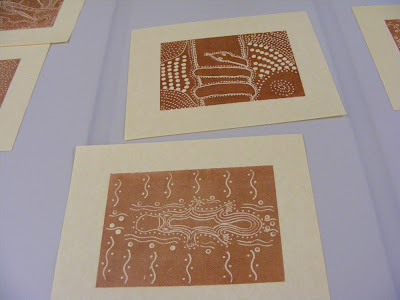 This is the 1st in a series of workshops Bernie is running on the theme of art around the world.  Next month is Spanish folk art.  The kids will get the chance to display selected pieces at an exhibition next year! 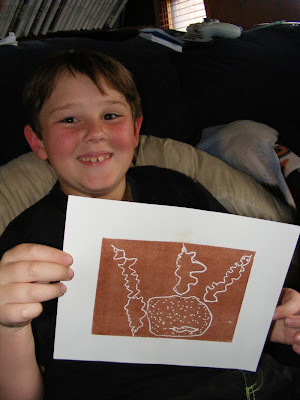 Happy birthday to me!

Well according to all the cards, life begins today!  Yes, today is the big 4-0.  Happy birthday to me :)

I had a BBQ with family on Saturday and went out for dinner on Saturday night, so today has been a bit quieter.  It's still been lovely though.

What Billy's been up to lately..

Billy is neck deep in 'Wind in the Willows' rehearsals at the moment so everything is fitting in around that.  He has three rehearsals this week - its madness :)  He's absolutely loving it though.

So lots of creative arts going on, with rehearsals, drama classes, photography and Halloween crafts...

There's been a touch of foreign languages going on as well.  We picked up a kid's French book cheaply at a book shop a couple of weeks ago - Billy read it all the way home, asking me questions and telling me the answer in French!  He's listened to the accompanying audio CD.  He also found that he could go to the French language version of Club Penguin which amused him for a while :) 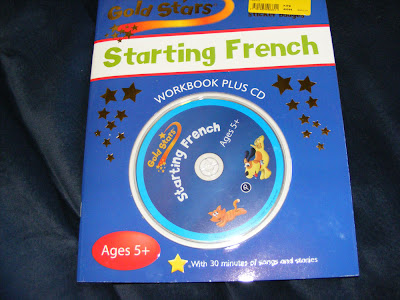 Let's not forget Science - we made slime today.  We watched some Stephen Hawking videos while investigating how his computer generated voice worked.  He's been making changes to his website again, and I noticed him playing with Pivot - the stick figure animation software - again. 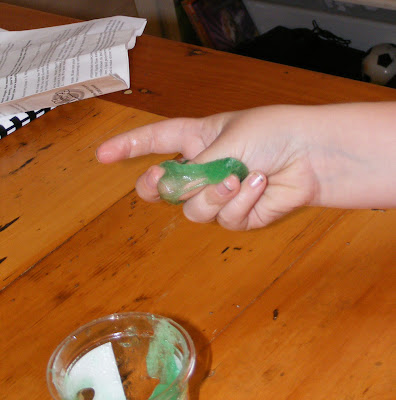 Sport is also back in full swing - martial arts (when it fits in around rehearsals!), archery and he's started swimming lessons (just for this term - in preparation for Xmas holiday swimming).

And in any spare pockets of time, he's been going to cubs, playing with friends and cousins, reading, playing with legos, cooking and just generally enjoying himself.
Posted by Kez at 8:39 pm 5 comments:

I've always said I can't write by hand anymore.  I need to sit in front of a computer to have the ideas flow.  Unfortunately its also way too easy to get distracted when sitting in front of the computer - ooh look, an email, while I'm at it I'll check Facebook etc etc ;)

On Tuesday I took my little netbook with me to write with while I sat in the car and waited for B's drama class to finish.  Its been so long since I've used it though that the battery was flat.  So I was forced to *gasp* write by hand in my 'handy dandy notebook'.  I got about 300 words written in 30 minutes - a bit slower than on the computer but with the added advantage of silencing my inner editor.  Its hard to make too many changes while you're writing by hand, so I was just writing.  I typed it up last night and made some changes as I was typing - first polish.

So I tried it again last night - put the computer aside and pulled out the pen and paper, then typed it up.  Again, it worked pretty well.  I think I might be on to something here...  It also has the added advantage that you can whip out a notebook & pen pretty much anywhere and not get a second look, but pulling out a computer just looks pretentious :)
Posted by Kez at 8:38 am 3 comments:

We don't really celebrate Halloween here in Australia but its a good excuse to do some fun crafts!
The first one we did today was some pin art.  (Very good for fine motor skills!)  Billy did two sheets - the first went on his bedroom window so the light shines through. 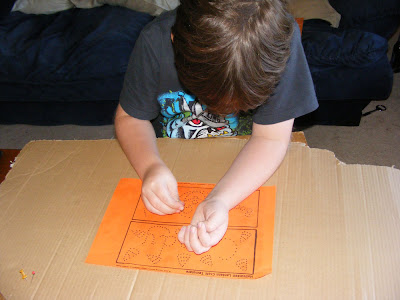 And the second wrapped around a glass jar with a tealight inside... 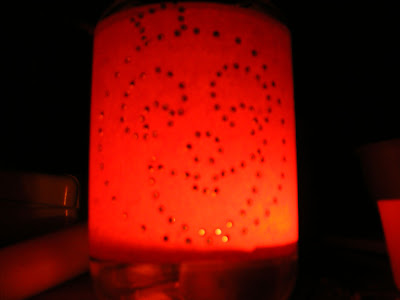 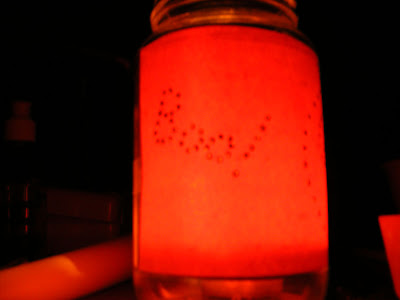 The second craft we did today was to make a flapping bat.  Isn't he cute?! 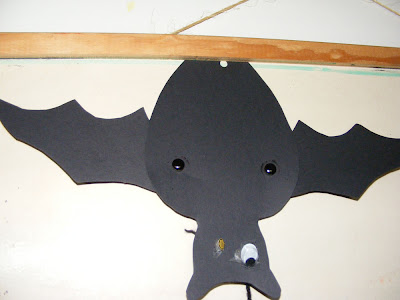 A couple of sites we've come across that have been useful:

* Create your own word search - http://tools.atozteacherstuff.com/word-search-maker/wordsearch.php

* Create your own crossword - http://www.crosswordpuzzlegames.com/create.html

Loving this short story course I'm doing!  Its been really valuable and we've only up to lecture 4!
Posted by Kez at 9:26 pm No comments:

We went to Taronga Park Zoo in Sydney on Monday as part of a group organised by one of our local homeschooling mums.  It was a great (although long & exhausting day!).  We had entry to the zoo through the day where we all went our own way.  To see everything you'd be running around all day, so we made the most of seeing the exotic animals and left the Australian animals - we're quite familiar with seeing those in other places (including in the wild!).

After the zoo closed, we went into their education centre and were split into 2 groups (there were about 60 of us there all together).  Our group firstly got to go and get friendly with some lizards.  Then they fed us with a BBQ tea - sausages, rolls, salad & pasta salad.  Finally, we went with our guides back around the zoo again for a couple of hours to see, hear & smell the zoo at night.  It wasn't quite what I was expecting, but really interesting to have a guided tour and hear anecdotes about the animals.  The crocodile gliding up to the edge of the enclosure lit only by a red spotlight was quite creepy!

What we've been up to lately..

I didn't realise it had been 10 days since I posted!


There's also been lots of catching up with friends that we don't usually get to see through term time, some movie making, lots and lots of lego play, and time spent with family.  It's been a busy but good break.

We start Term 4 back tomorrow with a trip to the zoo!
Posted by Kez at 6:57 pm 2 comments:

Since I seem to gravitate more to writing short stories / flash fiction than anything full-length, I've signed up to do a short story course through the RWA (Romance Writers of America).  I'm looking forward to it!

Speaking of short stories, I submitted another one to a writing.com competition last night.  It had to showcase emotion, so you needed to get inside the protagonist's head and see what they were feeling.  It had to start with the line "Her laughter broke the silence".  I'm not very good at writing emotion, so I wanted to enter the contest to get some feedback and help improve.

Warning - this one is not subtle, and is rated 18+ for violence..  I guess I've been watching Midsomer Murders too much lately :)  Actually I've been finding myself analysing the way they put the story together in that show, and how they sprinkle the clues etc.  Most of the time its extremely well done.  It's a great example of that old saying "if you show a gun in scene 1, you need to fire it by scene 3" (or whatever the actual quote is!)
Posted by Kez at 9:03 pm No comments:

After the disorganisation of last month, and having to buy stuff like sleeping bags & mats for camp, the credit card has taken a bit of a hammering.  So I'm attempting a No Spend Challenge for October - no spending on anything other than what's budgeted (emergencies excluded).

I've been grocery shopping today (on budget), so the freezer and pantry is full.  I just have to not spend on anything unnecessary.

Having declared that, I did have $18 of overdue fines at the library when I got books out today.  Billy had a DVD & some books that were overdue by a few weeks and I hadn't realised :(
Posted by Kez at 5:27 pm 6 comments: