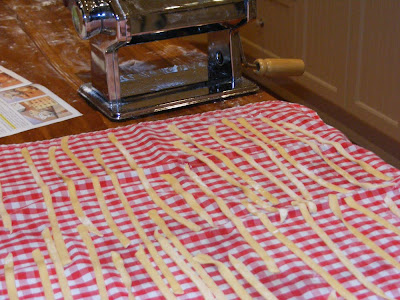 That's how tonight's tea was described by Master B! I finally got brave enough to make pasta! I followed Rhonda Jean's tutorial but made fettucine instead of ravioli since I didn't have ricotta. I made a tomato-based sauce to go with it - using fresh basil, oregano & parsley from the garden. Hopefully in 6 months time the entire sauce ingredients can come from my garden..

I made the pasta using 3 eggs & 2 cups flour - half the dough went in the freezer for another night, and the rest gave us enough for tea. I was a bit worried if there would be enough as my helper was eating it as fast as I made it!!

We spent Saturday up helping my MIL - my SIL & BIL had gone away for the weekend for a break, and my MIL scored looking after the 2yo triplets by herself! We went up for the afternoon to lend an extra few set of hands! It was exhausting!!

I cheated a bit and had my computer free day on Saturday instead of Sunday. No, I didn't cheat, it's called taking baby-steps!! We had about 4 hours in the morning before we left, and I kept the computer turned off - it was very hard. I even didn't check it when we got home that night - I was very proud :)

I've been doing quite well at staying off it, and have gotten quite a bit done around the house and garden in the 'spare time' I've found.

I've run out of time for Menu plan Monday - will have to do it tomorrow now.
Posted by Kez at 9:39 pm

Wow - home made pasta - sounds delicious.
You're did great staying off your computer. We won't talk about me - oh, okay, I'll admit thanks to rescue time I discovered I spent 5 hours on Sunday and 5.5hrs Monday online - and that is all personal/fun stuff (no work). So I'm going to follow your example and on Sundays (which is supposed to be our family day) only go online until the family is all up.

Hi Kerrie, congratulations on the home made pasta effort - will have to try it myself one day. Dont worry too much about time on the computer. I've been trying to make a effort too to reduce the amount of time spent on the computer and its hard to resist the urge at times to check emails or forums. Im finding the best thing that I can do for myself is to try and keep myself busy doing other things - distraction is the best medicine for me - maybe for you too ? Have fun xx Linda

I have memories of making pasta with my mum around the age of 5 as well! I would suppose she still has the machine, I should dig it up. Thanks for the inspiration! :)