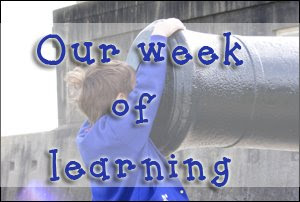 English: Lots of reading plus an hour on Spellodrome. He was also introduced to similes & metaphors, and homophones.

He wrote a very short story (or more like a script) about being kidnapped and a friend finding him.

Maths: An hour or so spent on the Mathletics site. We also discovered a kid's maths cartoon from the US called Cyberchase - I'd heard of it on one of the Yahoo groups I'm on and bemoaned the fact we didn't get it down here. I mentioned it to a friend who suggested looking on YouTube - why didn't I think of that??! There look to be hundreds of episodes on there! We've watched two so far - one on maps, grids, scale & co-ordinates and the other on measuring.

He also spent hours on the Cyberchase website playing with the maths games.

We're still reading "George's Secret Key to the Universe" (it's due back this week so we have to finish in the next few days!). Still on the space theme, we watched the slideshow on this website of the "Power of 10" - it's a series of pictures that "zoom in" by powers of 10 from 10 million light years from earth, down to the subatomic particles in a leaf. I dare you to watch it just once - it's very cool!!

We did an experiment I stole from Dana @ The Sunny Side's blog (it's ok - I told her I would!) showing how molecules move faster in warm water than cold water by watching how a few drops of food colouring disperses.

While at a friend's place they made a projector using a pluggable circuit board kit (its now on my want list!!).

HSIE (Human Society and it's environment):

We still have fruit slices mummifying on our kitchen bench.. You know you're a homeschooler when... :)

We read a beautifully illustrated book on Egypt called The Scarab's Secret.

He made a pyramid out of clay with a golden "treasure" embedded inside (a gold curtain ring), we dried it in the oven and then he played archaeologist and dug it back out. 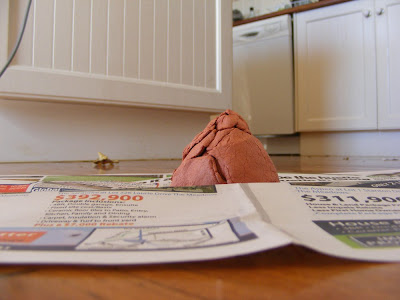 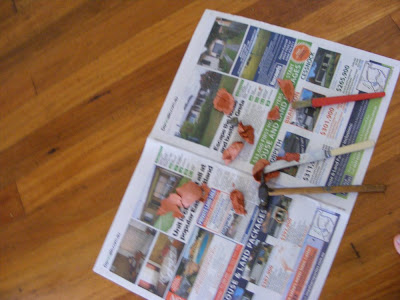 Creative & Practical Arts: He used Publisher & Photoshop to make his birthday party invitations. Lots of inventive play - that's what he does much of the time!

LOTE (Languages other than English): Nothing I can think of this week.

PDHPE (Personal Development, Health & Physical Education): Auskick training, circus class & lots of running around at a friend's place. He's finally gaining mastery of a trick with the flower / devil sticks at circus! In fact the teacher commented how much he's improved since he started last term.

Life skills (cooking, gardening, housekeeping): He made jelly all by himself - under very anxious and close supervision with the boiling water!

I've discovered that he's now tall enough to reach the clothesline so he helped me take the towels off the line and fold them.

Thanks for the shout out. Isn't that a fun experiment?!

I haven't heard of CyberChase. I'm going to have to look for it. It looks like you had a good week of learning!

We love Cyberchase! It's such a good show and does a great job of math and science concepts.

I've seen the power of ten site but it's been a while and I don't think I've shown the kids. I'll have to do that.

Hi,
I have been thinking about homeschooling (again!) and am after any advice/thoughts/suggestions.... anything you've got to help me make up my mind once and for all!
I'm scared of making the wrong decision....
:-)

hi! Do you like Spellodrome? We just discovered Mathletics and was wondering if its worth purchasing Spellodrome too. Please let me know.

Sorry it's taken me a while to reply. Billy loves spellodrome - I wasn't even going to buy it, but he loves it! Rather than being split into grade level like Mathletics, it's just in 3 levels. They have live drills like Mathletics against either a person or the computer - the computer says the word, then uses it in a sentence and they have to type it in. There is also a hangman type game once they reach certain points each week. It works with the same points & credits as Mathletics.