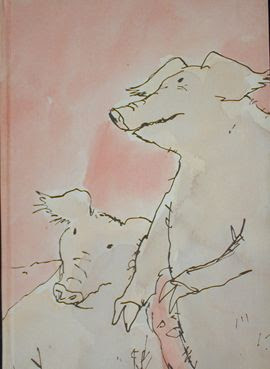 "All animals are equal but some are more equal than others."

I cannot believe I have never read this, but then I probably wasn't cynical enough to really appreciate it when I was younger :)

It's a very thinly veiled story of human nature in general & communism in particular - the animals of Manor Farm are sick of working like slaves for the humans and stage a rebellion. They take over the farm (now renamed Animal Farm) and set to work for themselves. They make 7 commandents, one of which is "All animals are equal". All is good and happy. They have plenty of food, and freedom.

Gradually though, the pigs start taking over as the ruling class. The animals start working for the pigs, but they are convinced that they are still better off - after all, they aren't working for the humans anymore. The farm turns into a dictatorship under the leadership of Napolean, the head pig, who rewrites history, spreads propaganda and changes the commandments..

"All animals are equal but some are more equal than others."

I absolutely loved this book! I spent the whole time chuckling wryly at what was happening and thinking "so true!". The copy I'd borrowed from the library was illustrated by Quentin Blake, one of my favourite illustrators, so it was even better!

Definitely a classic!
Posted by Kez at 8:00 am

I think it's great that you've decided to work on your own education from a personal level. I look forward to seeing how it goes. So many times people think 'oh i'd like to read that or do this' but we never do.

I have heard of this book but haven't read it. It seems like one I'd enjoy I'll have to add it to Mount To Be Read though.

I haven't read this one either. Thanks for the synopsis. I will likely pick it up now.

I read this and thought it was brilliant. If you haven't already, I suggest you read 1984 (I think I may have already told you about that one??)

Yeah I remember we had that discussion about 1984. I have read it before - twice I think - but it's on my list for another go!

I love Animal Farm, it was a required reading text in my secondary education way back in the early 70s so it has stuck with me. Great to see you enjoyed it so much. Reading it in the middle of the Cold war was interesting as it was the the height of the Red Scare and Commies were the real baddies, now you could equally apply the same orwellian principles of all animals are equal but some are more equal than others to the mega-capitalist bankers and speculators who have ruined our economies! I loved 1984 and Homage to Catalonia by Orwell too,and recommend them, if you are looking to expand your reading of his books.
Have fun in your own enlightenment journey, learning is indeed life-long, I never stop. (I went to Uni for the first time age 47!)
Catherine.

I love this book, and I had a great time sharing it with my older kids last year. I didn't know there was a version illustrated by Quentin Blake -- what a treat!