One of my focuses in our homeschool year of 2012 is to gain more understanding of Australian and local history.

Now if I mention that we're studying 'history' Billy will run a mile, but luckily there are ways to do it that he does enjoy.  Namely "living history" - tv shows, stories, excursions etc. 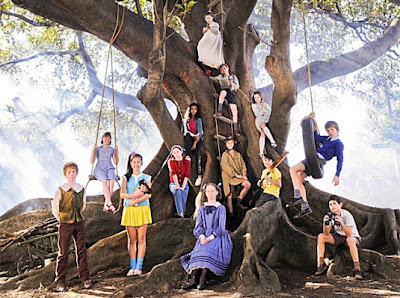 We've been watching a brilliant show called My Place.  We've seen some of the episodes before but never really sat down and watched them properly.  The show is set in the same house / piece of land in Sydney (with the gorgeous fig tree shown above) - it starts in 2008, and each episode goes back 10 years in history.  The story always centres around a child (usually around the 8-10 year old age) who lives there at that time.

As well as having a storyline where the child learns a life lesson (eg owning up to your mistakes, overcoming bullying etc), each episode shows the fashions, food, and attitudes of the era.  The references to the Greek boy Michealis being called a 'wog' at school, references to the Vietnamese boat people, the Vietnam war, Ramadan, the Aboriginal 'stolen generation' etc.  Its led to some wonderful discussions about discrimination, accepting people for who they are and how attitudes have slowly changed to make Australia a more multi-cultural country.

There are characters that follow through the series - for eg the next-door neighbour has remained constant (just gotten older) in the first 5 episodes that we've watched.  You trace one character from being the landlord in 2008 - 1988 to the dad in 1978, the young man going off to war in 1968 and the boy growing up in the house in 1958.  The weetbix cards that the boy is obsessed with in 1978 are found in the attic and given to the boy in 1998.

Its an incredibly well written show and Billy & I are both loving watching it.  Season 1 goes back to 1888 (I think) - Season 2 is about to start showing on TV again, continuing the story from 1878 to the early Aboriginal people.

It's based on a book by Nadia Wheatley so that's next on my list to find.

This is fabulous! Do you know if we can watch it in the US? I'm going to check out that book!

You can buy the book from Amazon, and the DVD from http://shop.abc.net.au/ but I don't know if they're the right format for you.

It looks like some of the episodes of series 1 are on YouTube - not legally and the quality looks pretty shocking.

Once they start showing series 2 next week, you should be able to watch it weekly on www.abc.net.au/iview.

Sounds like a brilliant and interesting show! Might have to check the ABC shop for it, and iview as well.

Just a heads up that I've changed my url & blog name. I had all but abandoned it last year so I'm starting fresh... but really want to keep a few of my bloggy friends (like you :) around! I feel special that I earned a spot in your sidebar!

My daughter is watching this at school! She is really enjoying it too.

The kids watched some of this series when it was on last. I have the first season on DVD here to watch properly.

So it starts at the present and works back....mmmm ok so watching it how I thought isn't going to work rofl!!!

Thanks for the reminder about this. :-)

I'd love to see you join the NBTS Hop. I know you guys don't use much in the way of formal curriculum, but it would be great to have some posts from someone not so structured :-)